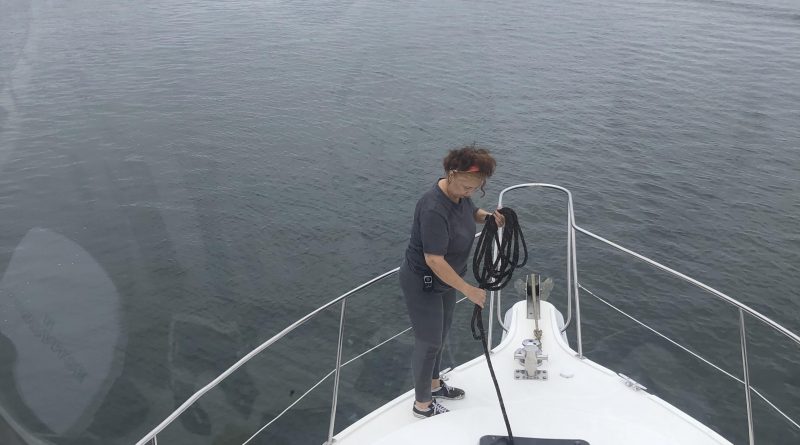 The dream of every boater is to cast off from the docks and head out to sea. Very few actually take the opportunity to do it. I can understand why. First of all it’s scary. Dreaming about it is fun and easy. Actually making the decision to do it is far more difficult. Because once you make the decision your life, as you know it, changes. In a good way.

When I purchased Mai Tai 16 years ago I had visions of cruising and exploration. For many years I used the boat primarily for leisure and social activities but never took the time to plan longer expeditions.

It wasn’t until I helped transport a friend’s boat from Puerto Vallarta to Ensenada, MX that I really got the bug. This was my first open sea voyage. It was the first of three voyages as a crew member over the next year.

These experiences motivated me and gave me the confidence to begin planning my own expedition.

Our Cruising Goals Were Simple

Plan a coastal cruise that included visits to as many ports and islands along the way as possible. The trip would conclude in the San Francisco Bay Delta where we would spend the winter.

This is the opening of a series of posts chronicling our voyage of a lifetime. From preparation and provisioning to navigating and exploring ports and anchorages all along the way.

A successful cruise is 90% preparation. Breaking down tasks into bite size chunks Is the key to success. It took me about a year to go from making the decision to casting off.

Preparing Yourself For Sea

The first leg of our journey revealed my lack of experience with navigation systems. Most of my experience was local. I rarely had to rely on navigation systems. The result was that I overshot our first port of call. Errors, compounded by poor visibility, choppy seas and distance from land resulted in frustration and confusion. I frantically tried to better understand what I did wrong, how I was going to correct the problem and get us safely into an anchorage for the night. It should have been an exciting day. But, it ended up being an eye opening self evaluation.

So, I was not as proficient with the program as I should have been. The root of the errors and problems that arose from the errors was overconfidence. I convinced myself that my experience as a pilot was sufficient for this new endeavor and that I could learn on-the-fly. Big mistake!

There Is No Substitute For Practice

Be physically and mentally ready for the challenge. The sea is unforgiving. Your vessel is not infallible. Being at sea all day is physically demanding. You need to know you’re up to the challenge. My experience crewing on other boats the year before gave me invaluable experience.

Not everyone is comfortable on the ocean. For the novice sea sickness and fatigue become very dangerous. Even seasoned sailors are susceptible to motion sickness under some circumstances. When I started spending more time on the water I became comfortable in most conditions. Even in the most violent conditions I can still function, though I may be sick.

Go out as often as possible in the lead up to your voyage. You don’t have to use your own boat. Go out with others whenever you can.

Preparing Your Boat For Sea

Our boat, Mai Tai, is a 32 year old gas powered boat that is not in bristol condition but is in good serviceable condition. I did the normal servicing like oil and filter, hauled her out for inspection of running gear, bottom paint and through hulls. I changed a couple throttle control cables, serviced the genset, rebuilt water pumps, rebuilt carburetors and replaced some aging isinglass.

Poking around in all the nooks and crannies revealed many surprises. I found through hulls I didn’t know existed. I learned the routing of all plumbing and electrical. I found rusted out hose clamps and rotted brass plumbing fittings. I really got to know my boat. I corrected deficiencies and came to understand it’s systems. Now, if something goes wrong I have a fighting chance to correct it when we’re alone in the middle of the ocean.

There were a number of other updates and upgrades, too but you get the idea. My goal was to address as many issues as possible that may become a problem at sea as possible. Even after all the work was done I still had issues that cropped up along the way. Fortunately none of them caused us to turn back home or cancel our cruise. I was able to address each problem myself.

One of the most helpful things I did leading up to this cruise was to take on all maintenance of Mai Tai myself. As a result I became intimately familiar with all the systems on the boat and capable of handling any emergencies short of a catastrophic failure. I also knew what tools and supplies I would need to bring on the trip.

Our first consideration was the weather and sea conditions. What time of year would offer the best conditions considering our crew, boat and experience. More important than the time of year is the time you have to complete the journey.

Patience is a virtue when it comes to making the go or no-go decision. Take the time to review all available data regarding sea condition and weather forecasts. Research local and macro weather cycles.

Then . . . wait for the conditions necessary to ensure safe passage.

Any Go or No-Go decision assumes you’ve considered the limits of your boat and your experience. Having to meet deadlines and dates should not be a consideration when making plans. When in doubt, Don’t Go!

Sometimes the best way to make a point is by telling a story. I was on a cruise a while ago that is perfect for this subject.

I crewed on a seven day trip with two others. We were ferrying a stout 50′ blue water cruiser. Luckily, this boat was built to survive most sea conditions. The captain and other crewman were experienced cruisers. I was the novice.

There was a delivery date to meet. Departure date was set. Weather reports were checked. We departed on schedule.

Blue sky, light breeze, flat seas. It was the perfect start. By mid-afternoon the westerly swells were building. Clouds and wind were building. By late afternoon the second in command began asking questions about the weather reports the captain was relying on.

That night it was clear that we were in for a wild ride. Rain was falling and swells and wind velocity were increasing. Westerly swells from the Pacific were converging with southerly swells from the Sea of Cortez. Our course . . . right on the convergence line.

By the morning of the second day the most experienced sailor on our crew announced he couldn’t function any longer. The seas had become so violent that his sea sickness had rendered him completely incapacitated. For the next three days he laid on the floor at the lowest level of the boat. The captain and I were sick, too. But, we managed to stay functional.

The captain revealed that he relied on only one forecast source when making his decision to go. Other sources correctly predicted the conditions we found ourselves in. For a less capable boat this decision could possibly have resulted in disaster.

If there was more time allowed for the delivery of the boat there would have been room to make other decisions . We could have travelled farther south or delayed our departure time. Either alternative would have resulted in far better conditions.

Seas were now 15 to 20 feet. Swells were steep and only a few seconds apart. We were taking them on the bow and they were breaking on our starboard side. We were wiping water off the console in the pilot house where water from breaking waves was making it’s way through the locking mechanisms. The ships bell was ringing constantly.

The captain was catching a few winks on the couch in the saloon. The captain was thrown from the couch and across the floor to the opposite side of the boat when a massive wave hit us broadside. Needless to say, he was up in the pilot house in an instant where he found me firmly ensconced in the captains chair. The alarm on his face quickly gave way to relief as he realized we had not hit something or were sinking.

These conditions persisted unabated for the next two days.

We made it through the worst and were heading into port at Cabo San Lucas. After anchoring we started picking fish off the decks and the roof of the pilot house. The water line from waves went half way up the dry stack (dry exhaust system) several feet above the pilot house. The boat performed very well.

We took the day to go ashore, eat and drink. Rehydrating after 3+ days of sea sickness and no food was high priority. At the end of the day we weighed anchor and headed for our final destination. Spirits were high. The crew was whole again. The seas were calm and sun was shining. We cruised through a patch of thousands of turtles that spanned miles. The night sky was magnificent. The next day we pulled into port and packed our bags.

This trip was most challenging, both mentally and physically, for all of us. I am grateful to have survived this experience because I learned so much. But, it was completely avoidable. If there was no deadline captain would have had flexibility in decision making. Perhaps more credence would have been given other weather sources that did accurately predict the conditions we encountered.

Moral Of The Story

If you’re on a pleasure cruise . . . allow plenty of time!