The trip from San Simeon to Monterey Bay is one of the longest legs of our entire trip.

This is a rugged and sparsely populated section of the California coast. There are no real refuges from wind and angry seas. Choosing a weather window that allows enough time for your ETE (estimated time en route) plus additional time in case of problems along the way is critical.

A major weather system extending down to San Francisco had been causing unsettled conditions as far south as Monterey for days. As we prepared to leave San Simeon it began moving north leaving us a window of opportunity we hoped would last at least for the day.

As it turned out we were blessed with very good sea conditions most of the day. Wind picked up a bit late in the afternoon as we approached Carmel. Wind chop became annoying but overall conditions were good as we entered Monterey Bay.

Monterey Bay is a prime fishing area. The Monterey Harbor is relatively small and heavily influenced by commercial fishing and tourist activities. There is little, if any, room for transients.  We couldn’t even find, see or get to the fuel dock let alone find a berth for the night.

Rather than wandering through this tightly packed marina we opted to head out to the nearby anchorage for the night. At the end of the day the wind was blowing and the temperature was feeling chilly. After a long day at sea we were ready for a little relaxation.

If we wanted a berth, so we could go ashore and see the sights, a call to the harbor master well ahead of time would be required. Simply dropping in was not an option.

In the morning we decided we didn’t want to deal with the hustle and bustle of Monterey Harbor and decided to head over to Moss Landing, the second of three harbors in Monterey bay.

It was a relatively short trip from Monterey to Moss Landing Harbor. We wanted to find a berth and easy access to fuel. Moss Landing looked like a good bet.

A Unique Port of Call

This is a classic fishing village. The tiny town is centered around the fishing industry. In fact, I think there are more boats here than houses.

Of all the ports, with the exception of Santa Cruz Island, this is the only one that has not been developed for tourism. It has managed to maintain its roots. It remains an authentic fishing village.

We arrived in the late afternoon. Even though it was late the harbor master was very accommodating. We felt like they really cared about us. Even the locals hanging out on the docks were happy to direct us to the slip we were assigned.

The docks are old and wood but in serviceable condition. About 300 of the 500 slips are occupied by commercial fishing boats.

Most of the businesses are located between the beach and the harbor and as a result you can walk to everything. There is even a fantastic roadside fruit and veggie stand we walked to about a mile south. And, The fuel dock is easily accessible.

We found this to be a very good port of call on many levels. Especially if you’re looking for something different or in need of service or repairs.

Speaking of service or repairs, it’s not surprising that this commercially oriented harbor has all the services a boater would typically need. There is a marine store (not a chain store), haul out service and many other service businesses all within walking distance.

As I mentioned earlier, we found a very large variety of fruits and vegetables at a roadside vendor. This is a major attraction for locals as well as tourists passing through. The quality, freshness and variety of products was better than most major chain grocers. And, the prices were the best we’d seen anywhere.

And, as we pulled our little cart back to the Mai Tai we stopped at the local fish monger located at the south entrance in to the marina. 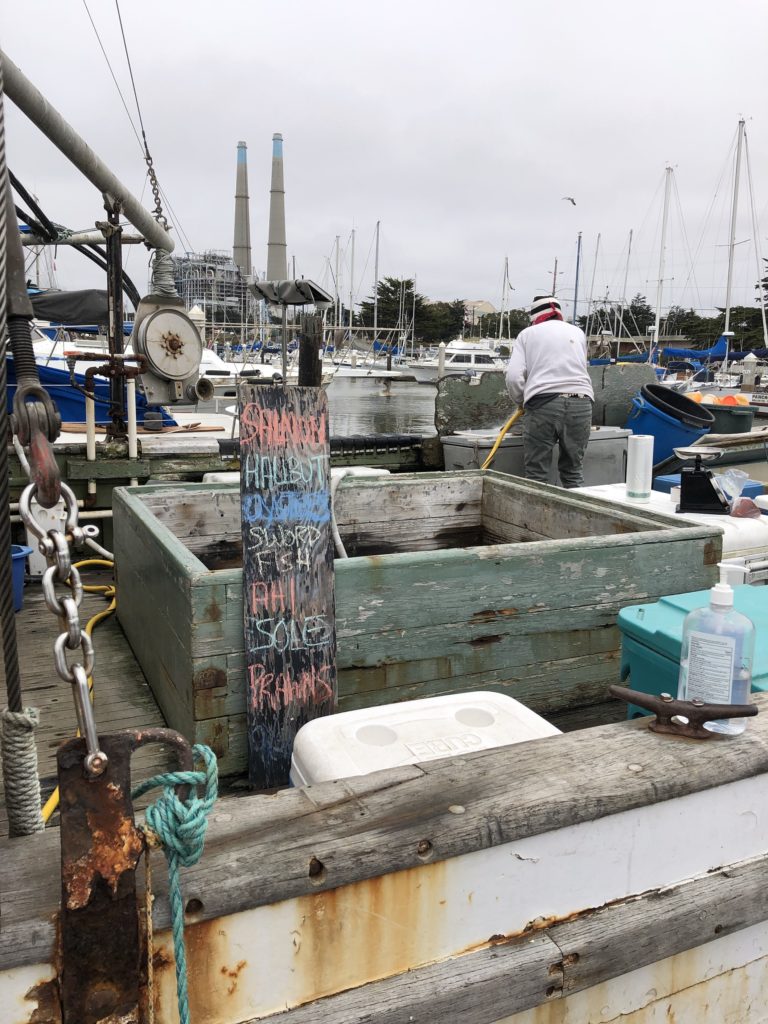 This boat and it’s operator are representative of a way of life that is as old as the sea. In the background you see the stacks of the fish processing plant that serve as an unmistakable landmark to approaching vessels.

On our walk we visited a great little curio shop in the little town of Moss Landing. They had everything from antiques to hand made arts and crafts. You will know you’ve found the place when you see the giant motorcycle sitting out front on a trailer. 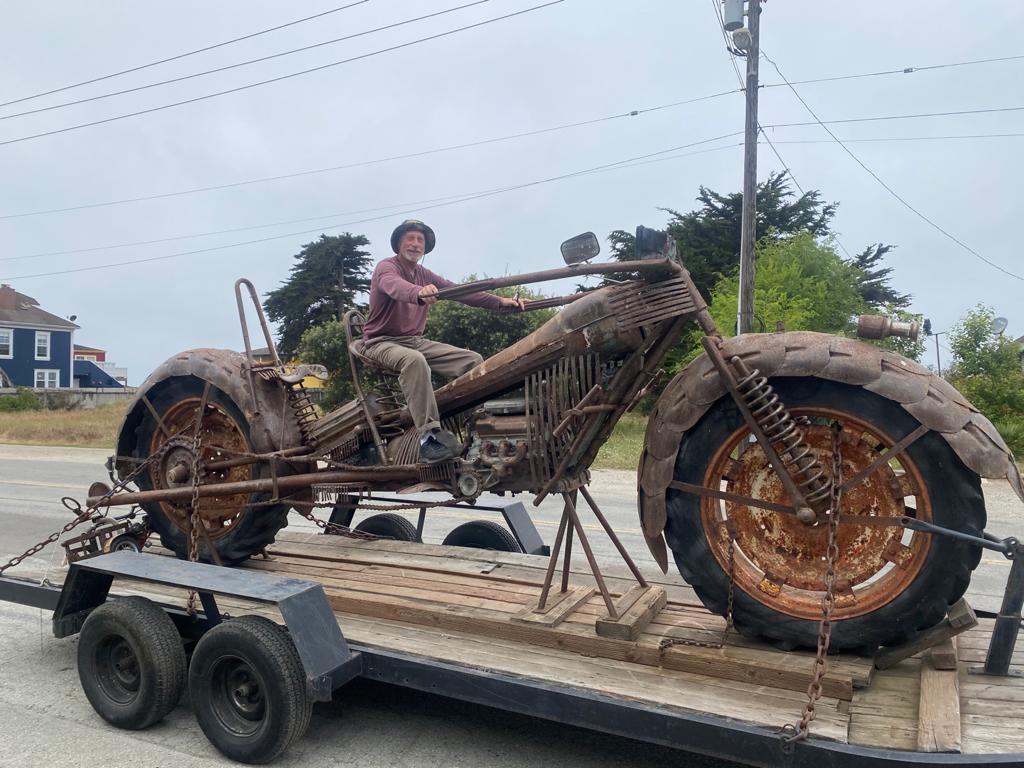 Saying Good-by To One History and Hello To Another

At 0 dark thirty we fired up Mai Tai and headed out to sea again. This time we are headed to another type of harbor. One that caters to fun seekers from around the state . . . Santa Cruz!

Known for it’s beautiful beaches and sea side attractions Santa Cruz has been a magnet to thrill seekers since I was a little kid, and even before that.

The Santa Cruz Harbor is modern and well maintained. The public dock is right inside the jetty and has fuel. 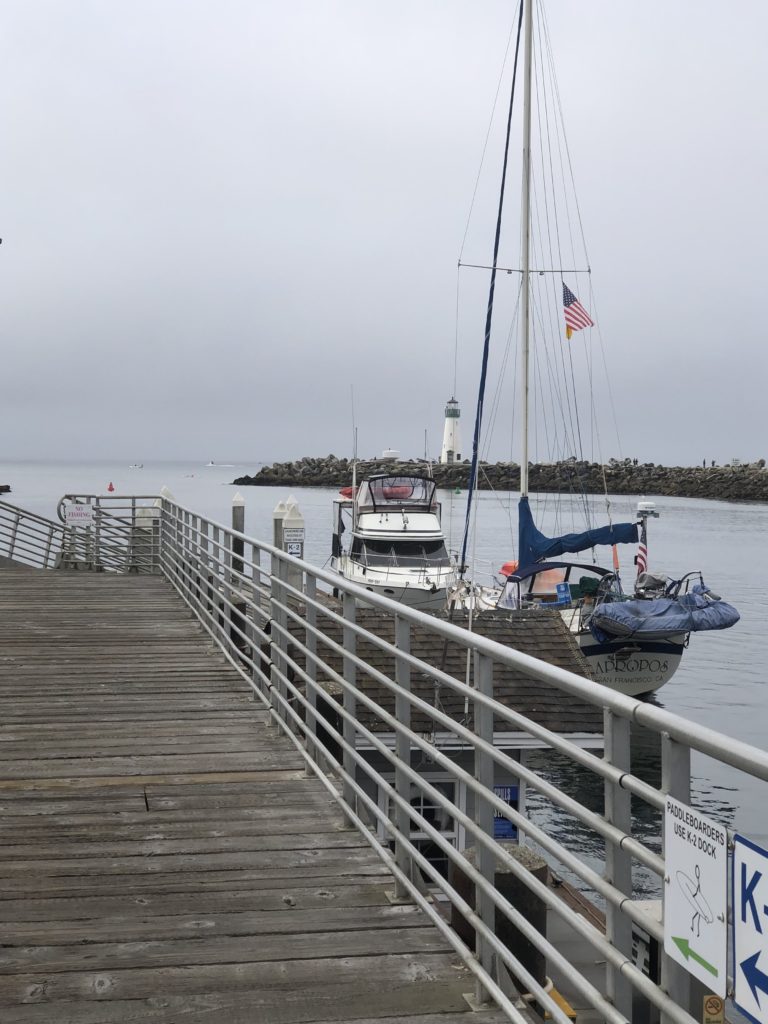 There are restaurants and shops right in the harbor complex. And, there are many more attractions and activities including the Municipal Wharf which is probably the center of attraction.

If you want to visit the Santa Cruz pier it is a bit of a walk or a short Uber ride away. Unfortunately, many of the main attractions were closed at the time we visited due to the plandemic. But, by the time you read this post hopefully all businesses will be back to “normal”.

A note for mariners cruising from Moss Landing to Santa Cruz in the early hours of the morning or in poor visibility. Fishing vessel traffic is pretty heavy at this time of day. We monitored our radar for targets crossing our path and were better able to avoid conflicts. Those with AIS systems will also see this traffic and will have the ability to contact the approaching vessels to coordinate proper separation.